This week is the penultimate week of Laeleiweyn's Alt Appreciation which happens to be #ShamanWeek.

I'm not entirely sure when I rolled my shaman but she's a female red Pandaren so I know it was after MoPs release. I love the red skin that Pandarens can have, especially as the females get long tails. Initially I wanted to roll a paladin panda (Palminglee) but as they can't be paladins I settled with a shammy, hence Shaminglee was born. 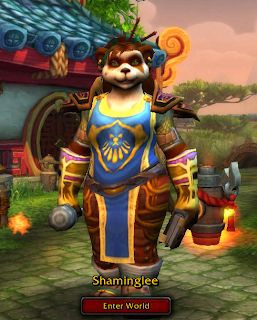 Her main spec is Elemental and I gave her a Restoration off-spec which I don't use half as much as I initially wanted to. To be honest I haven't played her for a while. I was simultaneously leveling her and my druid, Tertami, for a while before I decided to focus on just one and the druid won. As a result she's been sat at level 49 for ages.

I do, however, take her to the Darkmoon Faire most months. This past DMF she even got to kill Moonfang which was quite intersting on a lowbie char - lots of running back to find my corpse etc.

To celebrate #ShamanWeek I wanted to do something with her but my in-game time this week has been really limited due to starting my new job. As a result I only had a few hours today to play her. My aim was to finally get her to level 50 and to complete some of the Hallow's End world event quest chain in Stormwind / Goldshire.

I managed both of my aims and she also got the Creepy Crate pet. I took a load of screenshots along the way and will hopefully be using them as my entry for a Hallow's End Screenshot Competition over at The Wyverns Tail - so keep an eye out for my entry which I'll hopefully post this week.