In this post I talk about the competition, explain the inspirtion behind my story, the possible endings I had in mind and winning! You may want to read the actual story first (or vice-versa). 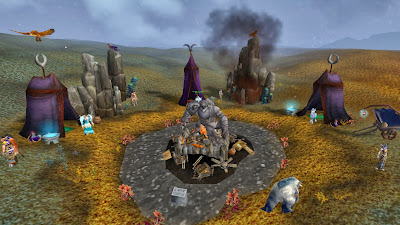 Back in August Kim (aka Daeaye) over at The Wyvern's Tail posted about a writing competition she was hosting. As part of her blog Kim writes diary entries from the point-of-view of her character Atherya Sunleaf and the idea was for your story to include an encounter or sorts with Atherya and that it would be incorporated into a diary entry. There were a few restrictions such as it needed to take place in Northrend etc.

I wasn't particuarly good at English Literature or Language at school, Science was my thing and still is! But I was fairly good at the creative writing aspects. Since completing my GCSE's in 2006 this here blog is the closest I have come to creatively writing. The challenge of writing a short story really appealed to me and I read some of the diary entries which made me realise the leveling progression of every chararcter in WoW is a story - kinda obvious I know but I'd never thought of it that way.

I'd made my decision - I was going to enter. I spent a week or so umming and ahing over the story plot. My druid, Tertami, had recently arrived in the Borean Tundra so I was playing her looking for inspiration. On evening I stumbled upon a Hordie killing various animals - mammoths, caribour etc. and I was a bit cheeky and followed along behind him skinning the corpses therefore not getting covered in Animal Blood. Fortunately said Hordie didn't appear to be a skinner himself, well he didnt /spit on me atleast! Anyway this little encounter is what inspired my short story though I tweeked it a little and left out that Tertami was herself a skinner.

When I got around to writing the story I found that once I had a plot in mind writing it was fairly easy and it just seemed to flow. Which surprised me, I'd expected it to be harder but I guess I was happy with the plot etc. One thing that I hadn't anticipated was getting so hooked up on describing the scenery. I love the Borean Tundra as a zone and I think I may have got a little over-absorbed into this!

I had two possible endings in mind but was unable to settle on one so left it open-ended. My inital idea was for Atherya to team-up with Tertami and for them to go and kick some poacher ass. Then I thought how likely is that to realisticaly happen - an Ally and Horde teaming up to battle some poachers? Which made me think about simply ending the story with Tertami flying off into the distance in search of poachers and Atherya continuing along looting the carcasses. I think the first, original ending is my favourite - possible because it's the most thought-out of the two.

Having submitted my entry I was really chuffed that I'd managed to write a short story based on a brief encounter I'd had in-game. When I got to work on Monday morning I noticed I had acouple of tweets congratulating me and I was really over the moon to find I'd won *big smiles*. I checked out the competition winners post and later got an email form Kim detailing what I'd won; a Gusting Grimoire, a watercolour painting of my character and some advertising on her blog. I still need to sort out the advertising and decide what 'mog I want my hunter in.

Massive congratulations to everyone that entered and especially to Rinike and Luxypie who both got honourble mentions! Again massive thanks to Kim for running the competition etc.

Sadly winning the competition was the best thing about my Monday and it went down hill drastically afterwards. It was my last day at work before I supposedly start my secondment next Monday but some serious cock-ups with regard to my salary, contract etc. mean I still have no definate information to go by. When I finsihed work I rang my Mum to rant at her that they'd cocked up again to find she was having a worse day! She was at one of her best friend (Jackie)'s house as her husband had had a massive heart attack. As I spoke to my Mum and then my sister they were still working on him (CPR etc.) but they'd been going for some time and called it as I was just hanging up. It also happened to be my parents wedding anniversary so they won't be forgetting that any time soon!

The silver lining was when I finally got home and was able to redeem my Grimoire...
Posted by Jojo at 16:29