On my quest to achieve That's a Lot of Pet Food and various other battle pet related achievements, a number of pets have eluded me. This list includes the Scourged Whelpling, Nordrassil Wisp and of course Minfernal. Until this morning I was yet to see any of these in the wild or even one that another player had tamed.

I use two key sites when I'm looking for battle pets in order to find the spawn spots and additional information about timers etc. These sites are Wowhead and Warcraft Pets. Warcraft Pets has an additional feature that makes it especially useful - you can track your pet collection. My collection is available on there via the community tab and collectors by realm (just search for Jojo or Oogleme). 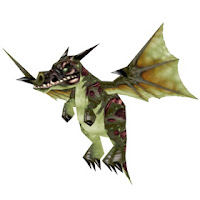 The majority of comments on both sites indicate that both the Scourged Whelpling and Minfernal are more likely to spawn after server restarts. The Nordrassil Wisp seems to be more a case of battling other pets in the area and hoping for the best. Despite all this evidence Ratshag over at press '5' to capture posted earlier in the week having found a Minfernal early Sunday evening.

So... armed with the information and knowing there was maintenance last night (with servers due back online at 11am server time / CET) I decided to try and find these elusive pets. Whilst I still don't have any game time on my account I discussed the idea with my boyfriend and he agreed that I could use his account. He even bought himself the Terrible Turnip - not that it would be any use as a level 1 pet.

This morning I logged in at approx. 10:48 ST - the servers were up earlier than expected! I asked in guild and found out that I had missed a good 20-30minutes of hunting time. I immediately made my way to Felwood and the Shattered Scar Vale - via Nordrassil, no wisp. When I arrived there was one other alliance player (from a different server) there flying around but within 10minutes more people were logging in and before long atleast a dozen people were present in the area.

For me this was somewhat of an early start and my brain wasn't fully functioning. As a result I misread a hordie's name which resulted in a rather bizarre series of thoughts. The hordie in question was a male Tauren and we all know how bulky these guys are. Personally I don't mind the Tauren but had never considered them a sexy race. Anyway, I read this guys name as 'Prostitute' when in fact it was 'Prostitue' (armory link). But I think we can all imagine where the name was heading and that I wasn't far off the desired reaction when thoughts of male Tauren prostitutes filled my mind. Anyway, if on the slim chance you're reading this Mr Prostitue or someone who is knows him (or her) please pass on a /salute.

Back to the pet hunting... In a bid to maximise my chances of finding a pet I logged into another of my boyf's characters and headed for Sindragosa's Fall, Icecrown. This spot was being camped less heavily with only two alliance and one hordie in the area. I had a brief chat with one of the alli who informed me that they'd been there since the server went back up and for the past three server restarts/maintenance and had not seen one Scourged Whelpling. 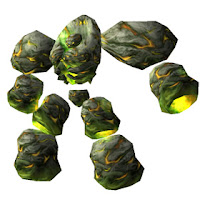 I spent 10minutes in Icecrown before hopping back over to the character I'd left in Felwood. Within about 5minutes of my return a player appeared - I'm 99% they'd just logged in. Either way they had Minfernal!!!
My heart sank - Had this person really just logged in or did they tame Minfernal whilst I was in Icecrown!?! or had they got him earlier before I realised the servers were back up early!?!
From the reactions of other players in the area it seemed this persons appearance had shocked everyone. Perhaps they'd just logged in to show-off their Minfernal.

After another half hour in Felwood I gave in and logged off. What the heck it wasn't my account anyway. I didn't achieve much this morning but I did see my first Minfernal. In a weird way this rather frustrating experience has inspired me even more to hunt down both Minfernal and the Scourged Whelpling ***fingers crossed***
Posted by Jojo at 17:37