When Pet Battles first went live I was curious how this would impact upon the prices of pets on the auction house. I noticed that there seemed to be a 'second-hand pet prices'. So, what exactly do I mean by this???

Just to recap a few points regardign battle pets. All wild pets can be captured via pet battles. These wild caught pets can not be caged and sold/swapped etc. However, pets that have been purchased from vendors, given as quest rewards etc can be.

On the auction house, pets for sale are now listed under two categories. The first is listed under 'Miscellaneous - Companion Pets' (see pic, blue highlight). Pets listed under here are new and unused. The second set of listings are under 'Battle Pets' (see pic, red circle) and these pets are those that have been used and later caged for resale. Quite simply, these are second-hand pets.

Earlier today, whilst browsing the AH, I noticed some good examples of what I mean by 'second-hand pet prices' and these finds have inspired this blog.

To purchase a new Personal World Destroyer (a pet made by engineers) will cost in the region of 2.5K gold.

A second hand one will only set you back 600 gold.

There's no sure answer for why theres such a big difference in price between the two versions of the same item.

Whilst I suspect someone is simply selling their second spare one I have no explanation why they've dropped the price so much.

Note: the icon pictures do vary but they are the same item. 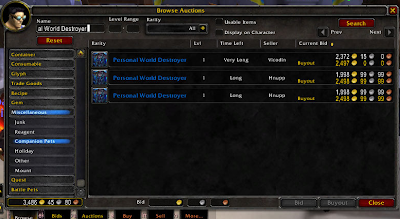 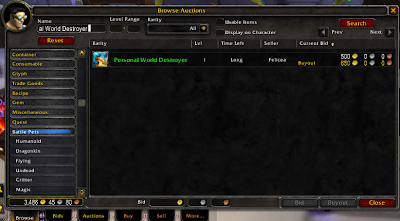 On my servers AH, there is currently two new Azure Whelpling's available. These vary in price a little and are just under 7K gold and just under 5K gold.

There is a single second hand one available at just over 4.5K gold.

The gap between the lower priced new whelp and the second hand one is much closer than was seen with the Personal World Destroyer (above).

In my experience these rare guys can sell for the prices they're currently listed at. 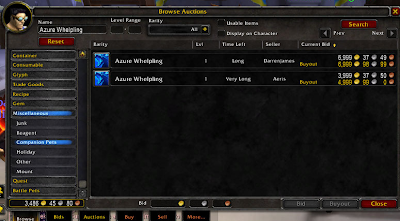 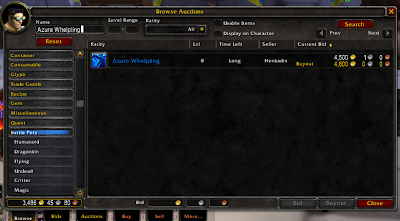 I thought I'd also include an example using a cheaper pet. The Crimson Snake can be purchased in game for 50 silver.

Selling vendor bought pets on the AH to make a small (or large) profit can be a great was of making money from lazy players.

A new one of these will set you back in the region of 100 gold - considerably more than the original vendor price.

However, a second hand one would only set you back 50 gold. Nonetheless, still a fair bit more than the vendor price. 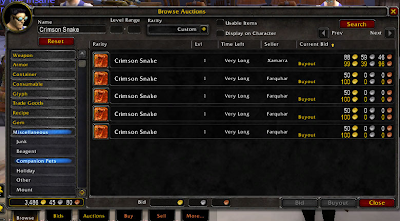 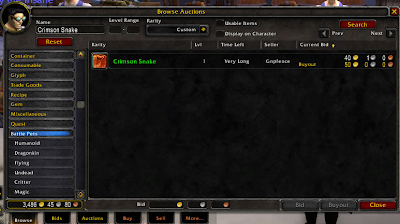 Here we can see the AH prices for the Ancona Chicken. This pet is bought from "Plucky" Johnson for 1 gold.

New ones range from 2 gold to just over 8 gold.

A second hand one that's been leveled up (to level 4) is selling on the AH for 400 gold. Also, two others are available for a ridiculous buy out of over 4K gold!!!

These example highlights that not all pets are cheaper second hand.

Whilst, admittedly, the first second hand option has been leveled (a little) I still don't think that justifies the 400 gold. But... 4K gold is a big no no! 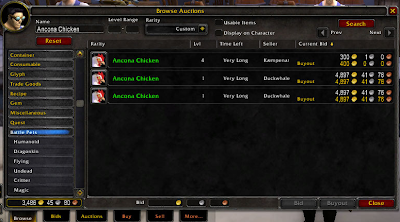 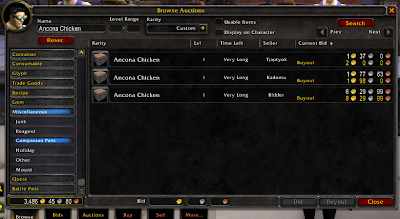 It really is a case of shopping around. If you see a pet under either listing (companion or battle pets) make sure you search for it, generally across the AH, before purchasing.

Similarly, before listing pets on the AH check how they're selling for under each respective means of listing. If you don't you could either be under-selling your item or over-selling it which will inevitable result in a no sale.