I had two days of game time left and was once again preparing for a mini 'break' from the game (albeit a non voluntary one). These breaks are almost part of my WoW routine happening pretty much every month or so when my game time ends. But not this time! A guildie messaged me to tell me that the Mists of Pandaria trial was now available giving me a handy 10 days free game play etc. So I waited it out and finally got to Pandaria.

I had a quick look online to find the trial restrictions (Source). The only real limitation was the experience capping to 1pt below hitting level 86. But this then essentially locked out half of Pandaria. Nonetheless I was able to roll a monk, start a farm, level some professions, tame some pets and generally make a bit of money. Not a bad 10 days!

Having only two level 85s made my decision very easy - I was taking my hunter first. I found the initial quests fun but can understand when people say by the third or fourth time of completion they can become rather repetitive. Along the way I tamed any pets I came across. I was slightly disappointed at the ease of the pets when battling them with my level 25s but loved the pet 'species' and models

I got my hunter to Pearlfin village and decided to stop questing as it was filling up my xp bar pretty fast and I wanted to avoid wasting any xp. I decided that I'd go start off my farm which meant getting from the Jade Forest to Halfhill, Valley of the Four Winds. Fortunately me and the boyf had both purchased the Vial of Sands prior to MoPs launch when the price temporarily dropped (from ~24K down to 17K). He gave me a lift to the Shrine of Seven Stars so I could set my hearthstone and then down to Halfhill.

My initial thought was how busy it was. People everywhere, most of them on (no doubt) their largest mounts sat on the npcs - one of my peeves! Anyway, I started the quests to opening up the first four plots. Once I'd opened up my plots I planted some juicycrunch carrots. At this point I was really enjoying the concept of growing you're own fruit & veg and the action of doing so. I understand why Blizzard added the aspects of watering your plants and applying pesticides - to make it more realistic. But I cant stand the bird! It seems to take me ages to kill it and not only that - the bird can damage me before I can even see it! Aside from that the farming went well and when I took my DK into Pandaria the first thing I did was open up the farm. Between my 8 plots I farmed enough carrots to level my cooking to 600 and way of the pot to 600.

So having fished on my travels in Pandaria I got to level 600 and part of the way through the Pandaria Angler achievement. I travelled into Krasarang Wilds and met the Anglers and Nat Pagle. I wasn't able to do much with either in terms of reputation but I did fish up a mimic octopus which I handed into Nat. In the Wilds I also happened upon a Jungle Grub which I tamed and is now a key member of my pet battle team. 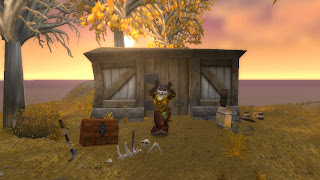 By around day 4 I was focused on farming and in a bid to not waste rep chose to make a monk. I rolled a panda and opted for a grey/black one having a red one (shaman) already. I'd enjoyed the Wandering Isle the first time around and had just as much fun the second time. I decided to go Brewmaster (my first tank ever) and found it easier than I'd imagined. Unfortunately the second half of my trial fell over Halloween and I had a party to prepare for. I only managed to get my monk to level 15 and didnt brave any dungeons. I won't be able to play my monk until I purchase MoP but atleast she won't be deleted.

My 10-day trial ended last night. I can safely say that overall I enjoyed my experiences of Pandaria. I would have liked to experience the daily system that a lot of people seem to be talking about but that can wait - for now. Hopefully returning to pre-MoP content won't be too much of a disappointment!
Posted by Jojo at 15:54