This past week was #PriestWeek - the part of Alt Appreciation I was least looking forward to... but perhaps I was wrong!

You see, I rolled a priest long ago when I was relatively new to the game. I think she was the third character I made. She was a human named Darsah. It's safe to say me and Darsah didn't see eye to eye on a lot of things. If memory serves she got to around level 20 before being dumped in Stormwind as my unofficial auctioning character. I even nicknamed her the 'B#&%h' and used to refer to her as this rather than her name. In the end I deleted her as I knew I'd never play her again. Sadly, I couldnt find any screenshots of her.

Ever since poor unfortunate Darsahs deleting I've always had this disliking for priests. That is until Ferleno!

Being a good sport I rolled a new priest. over on Ghostlands realm. I rolled her there and not on my home server (of Dragonblight) as I thought I'd not like her and end up leaving her behind. Turns out I was wrong. Yes, she's only level 8 but I'm really enjoying it - so far. I think as a player I have grown and I know a hell of a lot more now than I did back in Darsah's day! I've also rolled and played more classes since then and have got a feel for ranged and melee classes, those with pets and those without etc. I'm hoping that I will continue to get along with Ferleno and that she may one day become a reguarly played char (albeit on a different server). 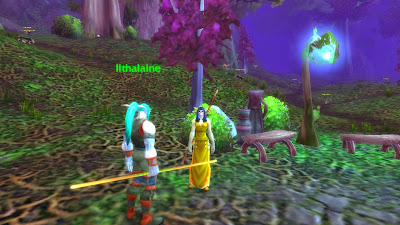