In last week's #ShamanWeek I said it was the penultimate week of Alt Appreciation but it wasn't and this week is! Somehow I managed to overlook this weeks Warlock theme and thought it was #WarriorWeek (the final week). But I realised early enough to half-recover the situation!

My warlock, Boltzy, has been sat in the early 30's for ages. At the beginning of this month I'd got her up to level 35 so that she could make some use of the DMF Profession quests and boost her tailoring & enchanting.

I was hoping to get her to level 40 during #WarlockWeek but my slight hiccup regarding what week it was anf being away with work for 2 days meant I didn't quite make it. In the end I got her to level 38. I took her through a few dungeons, did the Hallow's End questline and took her to Dustwallow Marsh where she is now questing. 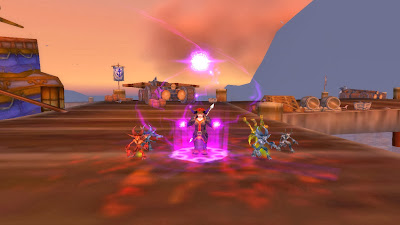 When I do get around to playing my warlock I generally enjoy it. I like the spell animations - especially the colours such as greens and purples. She's Demonology spec which means I can transform into a giant purple demon thing and do loads of damage. I previously took a series of screenshots of her demonic form which you can see here. My favourite phase of demon-ness has to be when she has purple horns coming out of her head!