Last weekend Laeleiweyn proposed the idea of celebrating the differeny classes in WoW via Alt Appreciation. Each week a different class is celebrated and it's up to you how you celebrate each class. I really liked the idea thinking it will give me a reason to play some alt classes that I don't play that often and even try out some new ones! 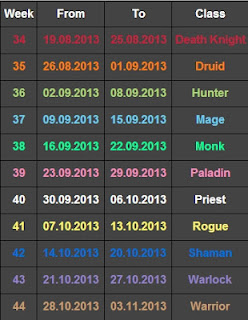 My DK is a little Gnome lady called Tizzling. She is my third level 90 and I'm currently using her to farm some veggies for my hunters cooking (which I could probably finish now). I do use her to run scenarios and dungeons in a vague effort to gear her up.

One thing I love about her is her survivability. I know people talk about DKs being indestructable and stuff like that but I never really believed it. But once I started playing her I soon realised she is one bad-ass killing machine.

With her being my only melee class I do suffer from a number of difficulties; such as forgetting I need to be right in the middle of the action, when I do remember standing in crap and running into stupid situations / taking on way too many baddies.

In order to honour her awesomeness during #DeathKnightWeek I decided to take her pet farming in Karazhan and that it was about time I looked into mogging her gear. I've got a collection of gear and weaponry in her bank and each of the transmogs below is inspired by an item I have.