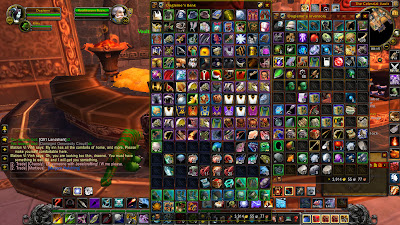 I know a few others had the same idea for this theme but I think that my bags say a lot about me. I'm a hoarder - in both reality and the virtual world. This is after I sold a load of stuff from my hunters bag. The left bit is her bank and the right her bag.

I was going to show you my personal guild bank but that would be even worse!! The worst part is that pretty much all of my chars have similar situations - bags of useful crap!

In addition to my bags and bank being cluttered I think my action bars are also in a bit of a state. There's abilities on them that I never use. To be fair, theres abilities that I don't even know exist and when people talka bout them it literally goes over my head. A prime example is Disengage - I rarely if ever use it but people rave about it being an essential hunter ability... so it sits there... waiting to be used... some day...
Posted by Jojo at 23:42