Yesterday I didn't do a 20 Days of Gold Making post as I was busy working on my Battle Pet Theme Team: Lunar Festival post. But I'm back on track today...

Thinking back to day 2, did you ever reach your goal or are you still working towards it? If you reached it - have you set yourself a new one?
In my Day 2 post I spoke about how I've never had a goal in terms of wanting x amount of money. Instead my goals have been to acquire an in game item for which I've needed a lot of gold to puchase. I gave two mounts as examples - the Sandstone Drake and Mekgineer's Chopper. 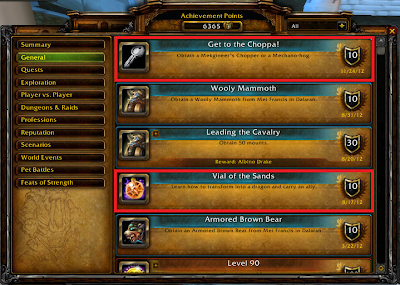 As you can see from the screenshot of my achievement window above I did manage to acquire both mounts.
I got the Sandstone Drake on 17/08/12 and I remember it very clearly. My boyfriend was browsing the auction house when he spotted two Vial of Sands for a cheap price. I can't remember the exact price but I think it was around 17k gold. At the time I only had 15k so he gave me the extra to buy it.
I got my own Chopper much later on 24/11/12. This was in part because I sold the first one that I made. The materials to make the Chopper are quite expensive and they always seemed to sell well on my server. So, I decided to try and sell mine with the aim of making 50% profit. The best part being that I did meaning my own chopper was effectively half price. You can't beat a bargain like that!
Since getting these two mounts I haven't really set myself any official goals. My unofficial goal is to have enough money for my hunter to purchase faction mounts/pets as she gets to the approproate reputation standing with them. 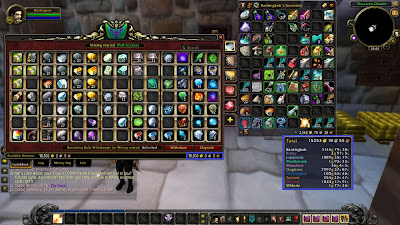 As you can see in the screenshot above my I've got a fair bit of gold in my guild vault / spread across my characters - just over 30k. So, getting the faction mounts/pets shouldn't be a problem.

I have therefore decided to set myself a monetary goal! In a few weeks it's my 1-year-of-playing-WoW-iversary and I'm really happy with myself for hitting the 30k mark and for getting the mounts/pets I want thus far.