Since I started playing WoW (even back before I had my own account) the Darkmoon Faire has been one of my favourite places. I love the carnival atmosphere and ofcourse the hourly shows by The Tauren Chieftain band. I try to attend the Faire each month on atleast my main 2-3 characters as it's worth the little time it takes. I'll assume that everyone has either been or understands the concept of the DMF but if not here is the event on Wowhead. Anyway, the DMF started last night at midnight game-time. I headed over and did the quests on my hunter and my mage. I was also fortunate enough to achieve several things last night!
Darkmoon Rabbit
The Darkmoon Rabbit was added with Patch 5.0.4. It's basically an evil rabbit that lives in a cave on the Island (it's a rare spawn on a 36+hr timer). Anyway, the idea is that people form groups and kill the rabbit. And last night I did exactly that!
This was the first time I'd killed the Darkmoon Rabbit and so I had very little idea of what to expect. I'll point out now that we killed the rabbit on the beach outside of the cave. I have asked a few people whom I know have also killed it, and they all seem to have killed it within the cave. But it seems either way works fine. 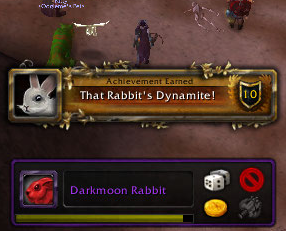 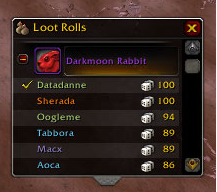 The first attempt was pretty pants to be honest. We had no tank but had a go anyway. The rabbit was jumping all over the place and there was a lot of HUGE, SHARP TEETH! The second attempt was much smoother with a tank. Eventually the rabbit was dead and I got the achievement The Rabbit's Dynamite! Naturally, everyone rolled need for the Darkmoon Rabbit companion pet. These guys seem to sell quite well on my server. Sadly, I came third on the roll annoying! 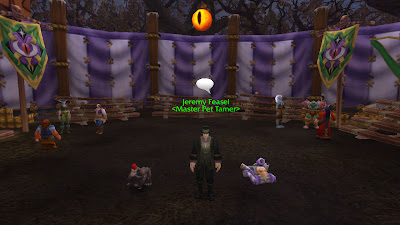 Last night I saw took and completed the quest Darkmoon Pet Battle! That's right, I defeated Jeremy Feasel. Unfortunately I didn't get the Darkmoon Eye - which has a low drop chance from the Darkmoon Pet Supplies.

I defeated Jeremy using my level 23 Terrible Turnip and two level 25's - a Jungle Grub and a Strand Crab. I think it was quite heavily based on luck as I've tried to defeat him twice today and failed both times. But atleast I know it's possible! 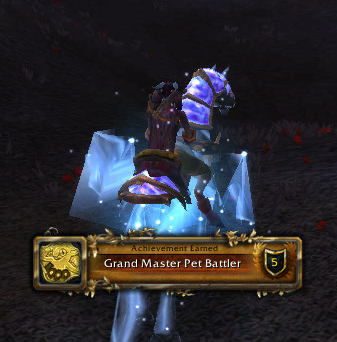