To celebrate her birthday Matty (of Sugar & Blood) is hosting an Oscars themed transmog contest aka Matty's Movie Mog Contest. The idea being to create transmog outfits for three characters from your favourite film.

I decided that I wanted to take part when I first saw Matty's post. Picking the movie was easy - I love Star Wars and probably a little top much. I have a collection of memorabilia worth thousands of pounds. I've attended numerous conventions and have been lucky enough to meet the likes of Mark Hamill, Kenny Baker, David Prowse, Peter Mayhew to name a few.

Anyway, back to the matter at hand. Initially I envisioned doing the iconic Princess Leia's slave girl look but couldn't make it 100% perfect. At this point I almost gave up on Star Wars and thought about doing LOTR - after all WoW has dwarves, elves and humans. But it just wasn't right and so I've battled through the MogIt catalogue to produce these: 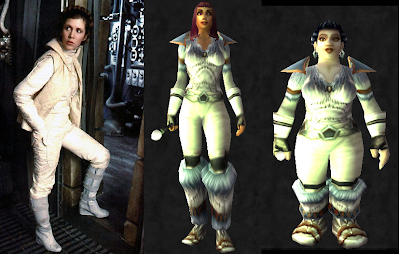 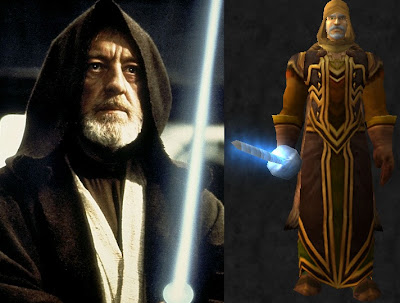 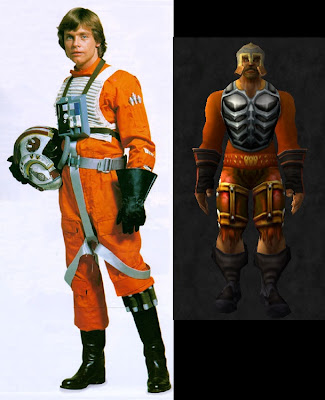 Helm: Trappers Helm / Chest: Spiderfang Carapace / Shirt: Orange Mageweave Shirt / Hands: Hands of Darkness / Belt: Molten Belt / Legs:Cutthroat's Pants / Feet: Boots of the Shifting Sands
Overall I am happy with all three of these transmog sets / ideas. I do wish I'd spent a little more time on them (I've been rather disorganised recently and didn't realise the deadline was tomorrow until yesterday) but having said that I'm not sure if I'd have found anything better.
I think the Luke Skywalker Pilot transmog is my favourite although it really is tough. You may have noticed I modelled Princess Leia's Hoth outfit (also seen during the kiss) on both a human and a dwarf. With the human model something wasn't right - the hair and I knew that dwarf females had a more suitable hairstyle hence two models.﻿
Also, I've been trying to keep up with other people's ideas and have only seen one other Star Wars set so far - with all different characters to mine! There's been a few LOTR's ones and a couple of Snow White and the Huntsman. I'm sure Matty will link them all on her blog so keep an eye out.