In Alt Appreciation #HunterWeek Part 1 I outlined my two aims for the week. Part 2 covered my trying out BM-spec on my main again and this post, Part 3, will be about my ickle Horde-hunter Jojomoo. 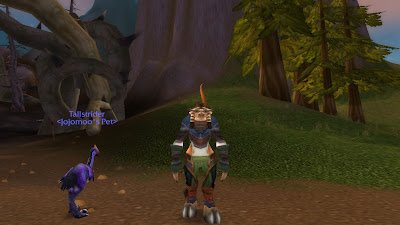 Jojomoo is a Tauren hunter and a member of the all-hunter Twitter-based guild Hunting High and Low on Draenor. The guild is being led by The Godmother of Alternative Chat and you can read more about it here.

I have to admit that I have been a little distracted this week and haven't spent as much time leveling her as I'd liked. Nonetheless she has progressed a bit and I have chosen to play her as a Marksmanship hunter (aka MM) which is a completely new spec to me! She is currently level 11 and just entering Azshara.

So far I've found a few things very weird. Not having Mend Pet has been really weird - especially when I decided to do some PvP. Initially I was a bit lost only having a couple of abilities but as I've leveld I've got a few more and now have a good 5 or 6 - not too many on the action bars but enough to feel somewhat more comfortable! 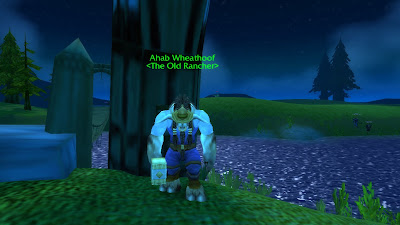 Aside from leveling a new hunter and reliving the experience it's been interesting to check out the AH of a high population server! Pets are generally cheaper than on my home server (Dragonblight - classed as medium pop but more like low). I think everything seems to be cheaper - but I guess more people playing means more items in circulation etc. 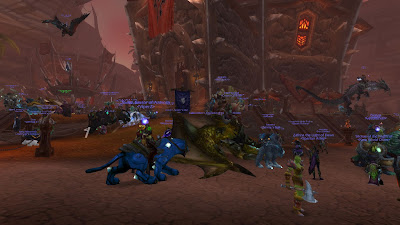 I've seen a couple of  Blingtron-4000's around and managed to get a Primordial Ruby from one gift box. They're on the Draenor AH for ~90g... excellent with that money I could buy the Kodo mounts... if only I had enough money to pay the auction deposit!! So I've had to put some lower crap on in the hope that it will sell and make me the money to cover the cost of auctioning my ruby *fingers crossed*.
Update: sold a stack of linen cloth for 4g 38s so I now have over 5g woo and have put the ruby on the AH!
Update: Ruby had sold before I'd even left the AH. Only went for 59g but thats a lot for a level 11 character... 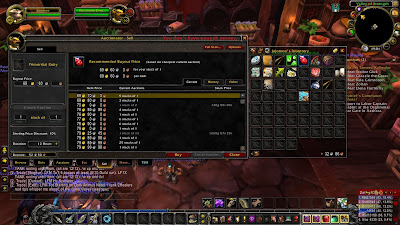