A week ago Batinna posted regarding a transmog challenge - Dress Up! There's 15 different themes to create transmogs for and they can be done as and when, but one a week is how Batinna herself will be doing it.

I love the idea of transmog but often lack inspiration so themes such as these a brilliant for me. So I've decided to take part. But, I have cheated a little!! Batinna wanted people to go out and actively collect, make etc. the gear - I've only created my masterpiece in MogIt though as it's clashed with Patch-week and I've been very sort on in-game time.

My 'mog is based on three pieces of the Nightscape Garb which my druid can make with leatherworking. The rest of the gear comes from drops and I have the staff. After all poor people would make their own clothing or steal it from dead bodies - right? 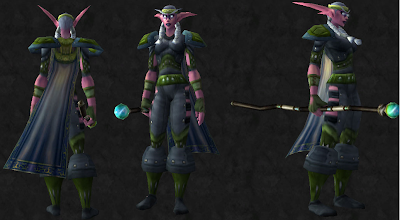