I Was Not Prepared!

Patch 5.4 is the first time that I've been up to date enough with content that I was able to experience it from the off. I'd checked it out on the PTR, leveled my engineering, completed all of the LFRs available, and thought about what pets I'd need for the Celestial Tournament  - but... I wasn't prepared for the excitement, wonder and simultaneous panic I'd feel!


Wednesday day-time I was at work which was a bit crappy as I'd miss the initial moments that the patch went live but I figured that by the time I'd get online in the evening things would have quietened down. Throughout the day the boyf was updating me that he'd killed so-and-so, got his legendary cloak etc. It all sounded pretty fun.

I got home, ate and logged into the game. I avoided reading any blog posts about the Timeless Isle so it was a complete surprise (though I had briefly been there on the PTR). When I got there is was packed full of people and there was hardly anything alive - but lots of animals corpses (perfect for skinners). I explored the isle and did a few of the starter quests and spent the majority of my time wondering around.

The biggest thing to hold me back was not the lack of mobs to kill, or the crazy amount of people there but was in fact my own indecisiveness. I couldn't decided if I wanted to quest, find all the chests, pet battle or a mixture!

In the end I opted for a mixture that favoured questing and obtaining the noodle carts. I didn't even have a go at the Celestial Pet Tournament but lets just say Little Tommy Newcomer was such a pain I gave up - there was much better things to be doing with my time.

Last night was very much the same - running around, exploring, killing, collecting and a bit of LFR on my mage. Tonight it's Friday Fun-Run time and then I have the weekend to really knuckle down with the new content.

On my travels I noticed a few cool features that have been added to the game: 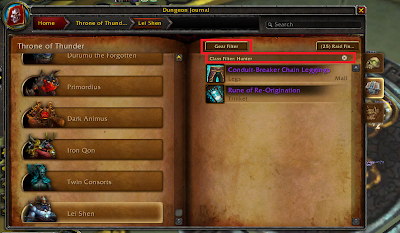 Oh and how could I forget that I got the schematic for Jard's Peculiar Energy Source on my engineer which unlocked a load of items I can now craft...