I'm going to jump straight in and say I failed. That's right, failed! Completely and utterly. I haven't even logged my Monk during #MonkWeek. *hangs head in shame*. 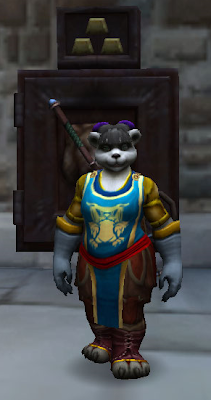 My failure is the result of a number of things. It was graduation week here so I had guests at the beginning of the week, my own graduation on the Wednesday, celebrating afterwards, work, saying goodbye to friends, coupled with server issues Saturday night and massively over-sleeping yesterday. So, the relatively little in-game time I've had has been focused on more important things - sorry monk lovers!!
There's also another reason I was slightly reluctant about logging my monk yesterday. She's a Pandaren. Whilst I love the Pandaren as a race I can't help but feel Pandaren monks are a bit too common. For a lot of people with maxed character slots (prior to MoP) their obvious choice was to roll a Pandaren monk upon launch. I'm not blaming you crazy altoholics at all. I just want to be different... 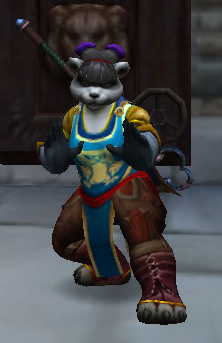 Plus Manikmonk is a pretty pants name!

Nonetheless I'll tell you a little about her journey. I leveled her with the boyfriends Pandaren monk (yes, he had a full roster). I chose Brewmaster (tanking) spec as I thought it would be handy leveling. I'd already completed the Wandering Isle on my shammy but enjoyed it just as much the second time around. I then quested her through Westfall and eventually into Loch Modan. She hit level 15 and that's where her leveling story ends. I wanted to take her into a dungeon but I guess I was too scared to tank it and so there she stayed, sat in Loch Modan, and other characters took priority. 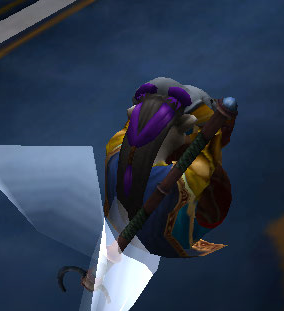 But this isn't the end of her story. When it came to making the decision to leave my old guild and start my own (as a refuge for us normal folk that wanted to stay together) I removed Manikmonk and used her to set up Stormwind Police Dept. She has since proved very useful as a sort of guild banking char selling any crap / excess items that's put in the gbank.

As for her future I can't be sure. For now she's safe in Stormwind Trade Dristrict. There's no point in deleting her 'til I've decided if I'm going to re-roll her as a different race (which is most like in the long run). If I do finally reach this decision then I will probably roll her appearance-wise as a class I don't yet have as part of Alt Appreciation in the future.